As soon as his fourth birthday party was over, Big J started planning for his fifth.

He wanted a “Yoda Birthday Party.”

He’s never even seen Yoda in a movie since we’ve only let him see Episode IV (the very first one made for those of you who aren’t sure), so I made the executive decision to make it a full Star Wars theme. After all, this mama could only do so much with Yoda.

This last Saturday, the party came together and it really didn’t cost too much – you just have to scour the internet and be creative with what you have! 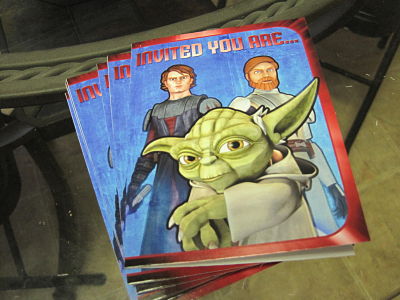 1. Start with the invites. This helps set the theme from the beginning so guests know what kind of party they will be attending. The best part about this pack of invites from Target? They came in a pack with matching thank yous at a great price! Sweet! 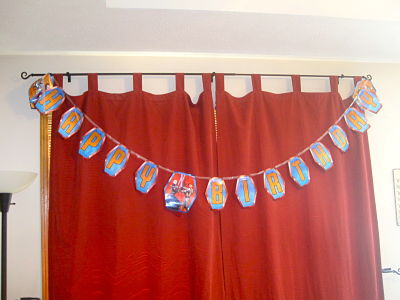 2. Keep the decor simple and use what you have. I bought this banner from Target, but that was about it for actual Star Wars decor. No need to go overboard! Even better would be using vintage Star Wars posters, but we didn’t have any so we went with this! 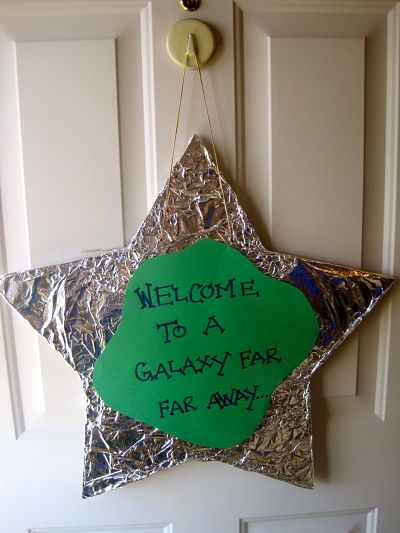 I had this star door hanger on hand – covered it in foil, added a fun saying and that was it! Maybe you have a door hanger like this lying around – a circle could be the Death Star, several shapes could be made into droids. Get creative with what you already have at home!

3. Set the mood with some music. The Star Wars soundtrack cannot be beat! Have it playing as children are arriving and during any indoor games!

4. Movie time! We have Star Wars {on VHS – yikes} and let it play in the basement where kids were playing as they waited for everyone to gather. Some kids were VERY interested, others just wanted to play, but it was fun just to have it on!!

How about some food? 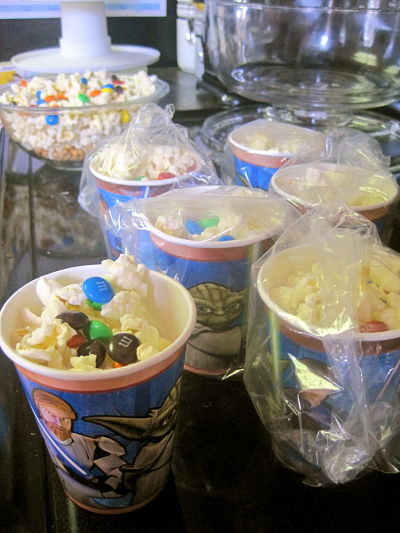 5. Padawan Popcorn. {I know, corny name!} We put a bowl of popcorn and M&Ms on the table, and also put a cup of it in the take-home goodie bags! The cups were pretty inexpensive at Target as well! 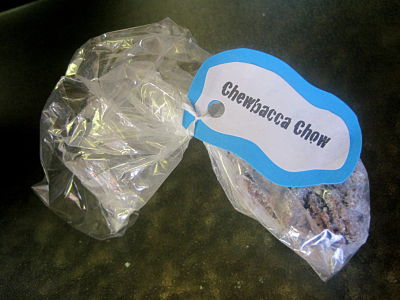 7. Lightsaber Pretzels. I actually thought of this idea laying in bed one night and thought I was so creative…until I looked on the internet and saw how many others were super creative too…with the same idea! You could use colored candy melts to make different colored lightsabers, but I was going frugal and used what we had – white almond bark and sprinkles on top, chocolate almond bark and M&Ms (as the power buttons) on the bottom! I love how they turned out!

And a few games {more fabulous ideas from Tip Junkie!}…

9. Asteroid Hunt! Almost everyone has foil in the house. Crumple up some foil with candy hidden in the middle, hide the “asteroids” around the house or outside, and let the kids loose! We met back at “mission control” after the hunt to discover the surprise treat inside! 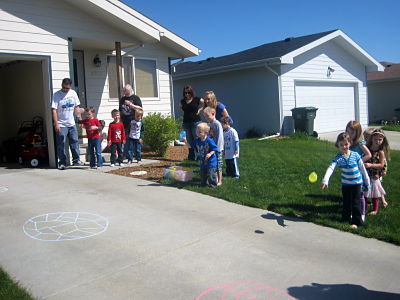 10. Defeat the Death Star. Draw a few “Death Stars” on the driveway or sidewalk with chalk, divide up into teams, put a bucket of water balloons by each team and et them take aim… 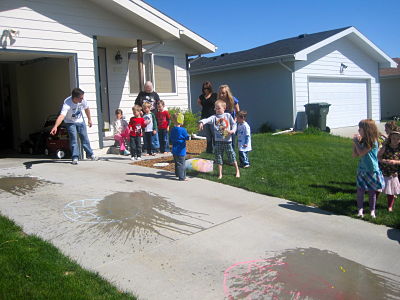 First team to completely erase their enemy ship wins! Thank goodness for a sunny day to be outside!

We had a blast, the party prep wasn’t too stressful on mama, and as everyone was leaving, Big J said: “BEST BIRTHDAY PARTY EVER!”

We love doing theme birthday parties around here, but they don’t have to be expensive and extravagant! Be like your kiddos and use your imagination!

🎶The things, worthwhile, you can't see them wit

#ShowChoirSunday 🎶 These performers SHINED on

10.10 miles while watching “Shang-Chi and the Le