When Big J told me he wanted his sixth birthday party to be a LEGO party, I did a little happy dance.

I knew the internet was swarming with LEGO birthday party ideas and, sure enough, Pinterest had more than enough inspiration to make planning this party a snap!

I have a whole Pinterest board devoted to LEGO birthday party ideas, but I actually kept the party pretty simple – no cake shaped like a LEGO or full-sized LEGO man at this house!

Here are a few ideas I DID use…

The LEGO Guessing Jar {idea from this post} – Put some LEGOs in a jar. Have kids make their guess as they come in. While kids are eating cake, count the LEGOs with them. Declare a winner. Easy peasy.

LEGO Toss {idea from this post} – I made three rings out of poster board, gave each ring a value, and let the kids toss LEGOs into the rings! The kids tossed three times per turn and earned M&Ms based on their tosses. I didn’t use any fancy LEGO-font labels, but the kids still had fun with it!

LEGO Building Station {idea also from this post} – I loved the idea of having the kids build during the party, but I didn’t want to limit them to just building race cars. I put a plate out for each of them and wrote their name on it. Throughout the party, they could return to their plate to keep building and no one was allowed to take LEGOs off another person’s plate. At the end, I took a picture of each kiddo with their masterpiece!

It was great – and SIMPLE – party, even if I do say so myself! Big J said it was his “best birthday ever” {he says that every year} and one mom called me afterwards to say her daughter was going on and on about fun it was! Success!

Here are a few more highlights from the day…

Primary colors are the way to go for LEGO party decor!

I found these candy blocks

on Amazon – they are hard enough to build with and taste sort of like SweetTarts, but not as good. The kids loved them – I put them in baggies as party favors! Two pounds was more than enough for 12 treat bags!

Chocolate covered strawberries as a surprise treat for the birthday boy! 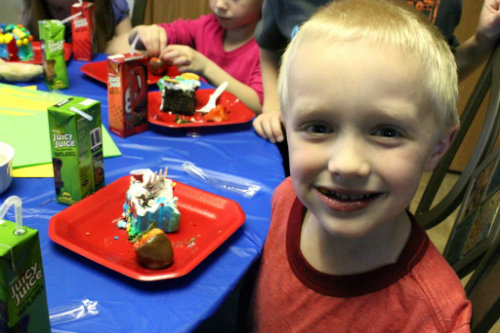 That is one happy SIX-year-old!

Thank you for all of the great party ideas!

My affection for you continues to grow.

No, it’s not time for their senior photos yet, b

Overalls for life. 💚 And this pair is one of my