What’s Up with the Boys? 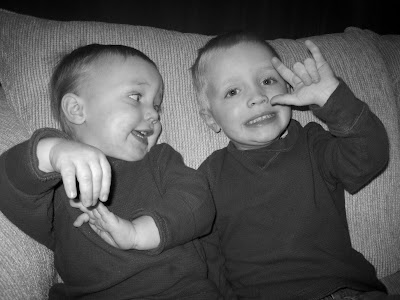 What are they up to these days? 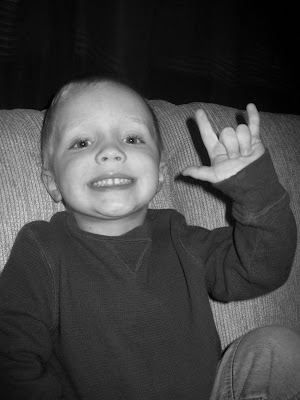 *Is signing “I love you” in the above pictures. These pictures were part of our Valentine’s cards!

*Is in swimming lessons and liking it for the most part. He hates floating on his back, but he LOVES jumping off the side into the pool. Strange, because none of the other kids like that part! I shouldn’t be surprised though, because he yells “To infinity and beyond” as he jumps into my arms. Once again with the obsession.

*Walks around the house singing a song about Jonah ALL the time. Or should I say, when he’s not pretending to be Buzz. And he is very picky about how the song is sung. He is three and is already concerned with dynamics. He also was giving “voice lessons” to his three-year-old friend at the the piano the other day and tried to explain the correct way to sing the song. Must be in the genes.

*Is the best snuggler – we sneak in a nap together every once in a while – and tells us he loves us out of the blue. It’s a beautiful thing being a parent.

And as for Little J, he… 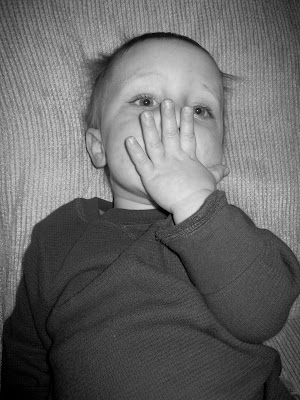 *Is blowing you kisses right now.

*Loves Buzz Lightyear as well – but he hasn’t told me how much.

*Copies just about everything his big brother does. I’m just waiting for him to fly off the couch.

*Loves the freedom of going up and down the stairs as much as he wants. I love this freedom as well.

*Wants to know what EVERYTHING is. Testing my patience, but in a good way. We love watching him learn!

*Is obsessed with pulling things off the shelf. I have lost track of the number of times I have had to put the ALL of the DVDs or ALL of the books in their room back on the shelf. I would have him help, but toddlers aren’t great at making lots of objects fit back into a space very well. We’ve tried.

*Gives us the best hugs and smiles – the dimples in those chubby cheeks just light up my day!

And now writing this post has made me all mushy, so I’m going to go give them each a big mommy squeeze.

After their masterclass at @noma_northomahamusicar